; News from E3 2015 and progress towards BETA release

Take On Mars was originally announced two years ago at E3 2013. What was then a Mars rover simulator has grown into a significantly larger game - especially with the addition of a manned section, multiplayer and new locations such as the Moon or the Low Earth Orbit. Since Bohemia Interactive is sponsoring the first PC Gaming Show at E3 this year, we thought we could use the opportunity to present Take On Mars there - and we did. With a brand new trailer!

Prepping for E3 combined with a bunch of other major things on our to-do lists ultimately resulted in moving the BETA release a little bit further. As we also want the BETA release to be as stable as possoble, we want to avoid pushing updates too often, because this could make the odds of randomly messing things up quite high.

With that said, we've had a period where we seemingly kept things quiet, but the reality behind the scenes was quite the opposite of that. Let's take a look at some of the things our team's been working on lately.

Changing the design of buildings and building blocks is something that not everyone would consider necessary, but it's going to be an important part of the BETA release. The word "redesign" in this context means not only changing the models and textures, but basically reworking the entire system of what players can build with available parts.

Bases built with the new building blocks will feel less like "bubbles" and more like real buildings. Making the blocks larger and available in many different shapes and variants should also sweeten the building process and lead to more unique, believable structures. Also, interior and exterior blocks are now separate. This allows for the construction of greenhouses (only exterior panels with windows), or full buildings with several floors and rooms.

Since proper interiors would feel empty without more equipment, we are now also working on additional furniture pieces, such as sofas, beds or new chairs that have their intended functionality. 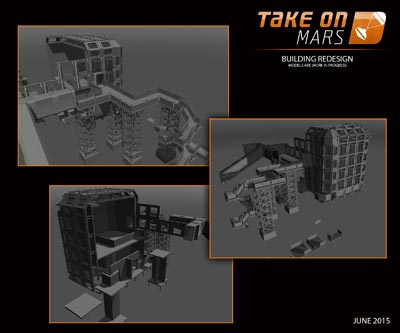 Don't jump around a lot in Take On Mars, or you'll experience some nasty falls! If you are subscribed to the Test Branch on Steam, you've probably already noticed the new contextual climbing animation. Another addition to the character movement in the BETA will be ragdolls. If you, for some reason, miss your jump, fall unconscious, die, or have no oxygen, your friends will be able to drag you into an airlock, or you'll be able to recover your things from your body later - all that with new animations.

We've been recently fighting some nasty crashes related to texture size, which we will need to reduce a bit, because it was filling the available video memory in a sub-optimal way. Also, atmospheric zones are incorrectly generated on occasion (sometimes a zone is not generated where it should be), so this is one fix we need to take care of, as well as bunch of other things: for example, we've spent quite some time working on the Steam Workshop implementation, which we are quite proud of. It is fully functional now and makes the process of joining multiplayer sessions with mods much easier.

Before the BETA release, we also need to address another important part of Take On Mars development: localization. We are now coordinating the translation of Take On Mars into 10 different languages. Combined, the original English texts contain more than 38 000 words, while the biggest portion of the text is dedicated to the Take On Mars Wiki (which is basically a big educational handbook with everything you need to know about Mars or space exploration).

One thing we would really, really like to emphasize is that majority of translations is taken care of by either enthusiastic professional translators or with the help of Take On Mars community members. We would like to thank everyone participating in the translation process for their hard work (hint: they will be soon able to read their names in Credits!). After we finish the largest chunk of translations during BETA, we are confident that players from around the world will appreciate the effort put into it. Please bear in mind though that translations in BETA will be a work in progress, constantly developing and improving until full release, as will be the case for the whole game of course.

We have the the BETA release scheduled on July 3rd, 2015, and we will do our best to deliver in time. After all, we really want to, because if all goes well, we should be able to treat you with a very exciting addition to the game sometime after BETA. But let's just keep it a surprise feature for now on.